Those Tiny Little Feet (of My Irreplaceable Grandma) 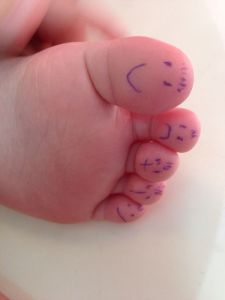 My uncle always says that: “There’s no point crying and moaning when one is gone; what matters is how you treat each other when they were still around.”

I didn’t see him shed too many tears during the passing of grandma – for a very good reason, of course. It was however, a very difficult act for me to follow, especially when I know that I am guilty of many shortcomings myself.

When I was alone with Lita today (Grandma’s dear helper for 22 years) while seated next to Grandma in her coffin chiller, I curiously asked Lita who was grandma’s favorite grandchild. It was a question that had never occurred to me at all until Eddy brought it up on Whatsapp today.

Without skipping a heartbeat, Lita responded that it was me. While a part of me was overwhelmed with warmth, joy and love and a tiny sense of victory; the other part of me was crushed into a million little pieces. I tried to suppress my tears that very moment, because I knew deep down inside that I was not worthy.

Growing up, I secretly despised the fact that I was the one who got the most scolding from grandma. At one stage of my life, I was even convinced that she hated me.

Nothing I did was ever good enough for her. She always held me to military standards; be it my grades, the clothes I wear, my seating posture or even with my hairstyle.

There were always rules and boundaries for us to abide to; like how to behave at the dinner table – who gets to eat first, who to greet, how to address the elders and the never ending list of what-not-to-dos during Chinese New Year.

And whenever there was a feud between my cousin and me, I would always be the one to get the blame. Grandma to me was a strict communist leader that could send shiver to my spine with just one look.

Still, she hasn’t changed after all these years. The other day, she paid me a surprise visit with Aunty Ling to a business event that I organised. Later on when I caught up with her, she complained that I did not publicly acknowledge her presence. Despite the comment, that day was probably one of the proudest moment of my professional career because I was being witnessed by grandma while I was seated on stage.

I treasure the moments I spend with grandma whenever I come to KB. I love giving her foot massage, in exchange for juicy stories that she would tell me about her past. There was always something new that I would learn about our heritage with each interaction with grandma. That, as well as getting an update from her about the affairs of all my relatives from all over the world was simply priceless (I tried to pass on the skills to my 3 year old daughter to very little success, although Siena would always earn a big angpow whenever she touched Grandma’s feet).

Grandma was like a wise old owl who knows about anything and everything. While she doesn’t have any particular set of academic qualifications, she advocates learning about life through Hong Kong Drama series. Grandma would always asked us to pay attention to the bad guys on TV for it is through watching the villains that you learn how to avoid pitfalls of the society. She could dissect a difficult problem with great clarity and provide the most pragmatic set of solutions.

Grandma possessed pair of tiny feet that were soft like silk; she preferred a more gentle pressure on her feet in the recent years as her tolerance for pain deteriorated. She always smiled when I asked her how she maintained her beautiful skins, thinking that it was one of my sweet talks for the old lady. Boy, am I going to miss that smooth, tender texture of grandma’s feet for as long as I can remember.

Being a father now, and a leader of my organization, I understand that grandma’s strictness was simply an expression of love; out of kindness and concerns that she had for me. Although she didn’t say much, I knew deep inside that she would have been very proud of my work that day at the event.

To the woman who tirelessly raised up 8 outstanding children, 19 grandkids and 8 great grand children who respect and adore her to bits, the word ‘Success’ seems to be an understatement – diluted in the overused context of our society today- to describe grandma’s achievements.

Such is a life well lived.

One that is worthy to be honored, cherished and celebrated.