Be that other Hotel Thief…

Posted by shaunhoon on October 24, 2011
Posted in: etc. Leave a comment 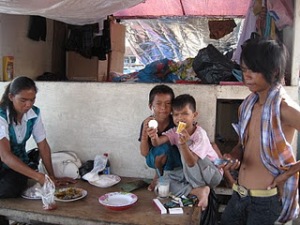 I visited Kota Kinabalu last week together with my wife. Before Deon could even open the newspaper, we were ready for landing. So close, and yet so far, it’s almost like Singapore (Brunei) and Johore Bharu (KK). Except that KK is exciting, vibrant and far more fun than JB and Brunei could ever be. However, the poverty level is still very much prevalent in KK as it is in JB.

One Borneo, the island’s biggest shopping mall exposes you to the world’s super brands, Starbucks, Levi’s, Nike, Adidas, Mac, FCUK and even MNG, which makes completely no sense at all, as the word Borneo rhymes with Jungle and Rain Forest!

The highlight of the trip was never One Borneo or any of the pleasing sales associates. Nor were the two (proper) massages in four days, although one per day would have been perfect (my body simply couldn’t handle that). Seafood was brilliant, even that would have to rank third comparing to #2, which was finding Nemo in Manuka Island.

The highlight of my KK’s trip was each morning when I walked alone to the river bank to watch stall keepers setting up little shops, and be captivated by the early morning breeze while enjoying the crisp of fresh air when it is not too polluted by on going traffic, yet. (Disclosure: some places I pass by could smell the direct opposite of this description, but I choose to share my experiences half full.)

That of course, is just part of the story. The fun part comes when I get to talk to seemingly homeless children (apparently their mum would leave them hanging out at the stalls for the better part of the day, while they make a living) and watch them be kid, trying to con this foreigner (me) the little money he has in his pocket. Nothing gave me more joy than seeing their face lit up when I treated them to a stall to pick up whatever they want. For RM 9, I managed to buy each of them a coke, some snacks and some little toys that would probably give them enough satisfaction for the entire day, compare that to my rich cousins who wouldn’t have cared less.

They say football connects the world, this statement was tested with the kids, non of whom their name I remember. But each of them is a masterful impersonation of Brazilian, German, Argentina and Spainish star. Christiano Ronaldo of Portugal & Torre of Spain were the most popular, followed by Messi and Kaka. I visited the same kids three of the four mornings. Twice they were still sleeping on the crate. Not wanting to disturb them, I left some cakes I bought for them from the coffee shop on day #2 and passed some pictures that I took of them on the day I left. It must have been the boy’s first time to see his own photo, the intense starre on the piece of picture was like nothing I’ve ever witnessed before. How do you forget that?

I also made friends with the family that have a hut facing the river. They survived by trading water with Islanders, and have been living in that condition for 15 years. Each day, I will do what Robin Hood does best, “taking” the shampoos, soaps, coffee and teas from hotel room and gave to them. Need I elaborate more on their appreciation?

Seeing these people, makes one wonder where is God? Does Jesus not care as much for them as he does for me? Why then the double standard? It dawn on me that perhaps God is giving the opportunity for we as Christian to shoulder on the responsibility in showing God’s love through our action. There is no other explaination.

I do not have the answer, but those few morning were sacred for me, as there was an overriding joy that came from connecting with these people, as Campoloso poignantly pointed out in his messages, we often find God in the least of these, referring to Matthew 25:40.

My mum would not have accused me of not going to Church that Sunday, I doubt I would have connected with God the same way as I did with Ronaldo, Torre and Kaka, if I had been to church that very Sunday.

I am in no intention at all writing this to impress you with my little acts, as they are truly miniature. But I hope to leave you with a couple of departing thoughts:

A/ It doesn’t have to cost much to make a difference, it takes heart.

B/ Connecting to God doesn’t need to be in church. Confessing to God, does.(Just kidding, what do I know?!)

C/ The next time you travel, try stealing from the hotel in honour of me, and give to the needy(while saying this, my brother just got burglared in a hotel in Jakarta just yesterday, that is a whole other blog)!

D/ If you can, do not just take pictures of people on the street. Develop the pictures and give it to them. Watch their reaction – which may make a much better Kodak moment.

The money I spend on the needy was pocket change comparing to the 2 Puma Shirts I acquired at 50% off sale, or the spending on massages and finding Nemo, let alone the exquisite Seafood I enjoyed. I should have and could done a lot more.

The point is, non of the above gave me as much lasting joy as my early morning experiences. I am truly at the receiving end in the privilege to make a small difference that Friday, Saturday and Monday.

>>> If you want to be a thief, be that other thief of the hotel. Not the one that impersonates the hotel guest, open and empty one’s safe box and steal one’s laptop and take away one’s Ipod. Yes, you, the guy who stole from my brother!

>>> This blog is dedicated to my sister Janet, who shared with me the walk to KK’s wet market some 10 years ago. Wish you were there, sis.

>>> Tribute to the genesis of this idea, Gwen. Since we last spoke, I’ve also tapau-ed from wedding banquet left-over to give to the Thai construction worker near home. The act may not look good, but it definitely feels fantastic doing it!